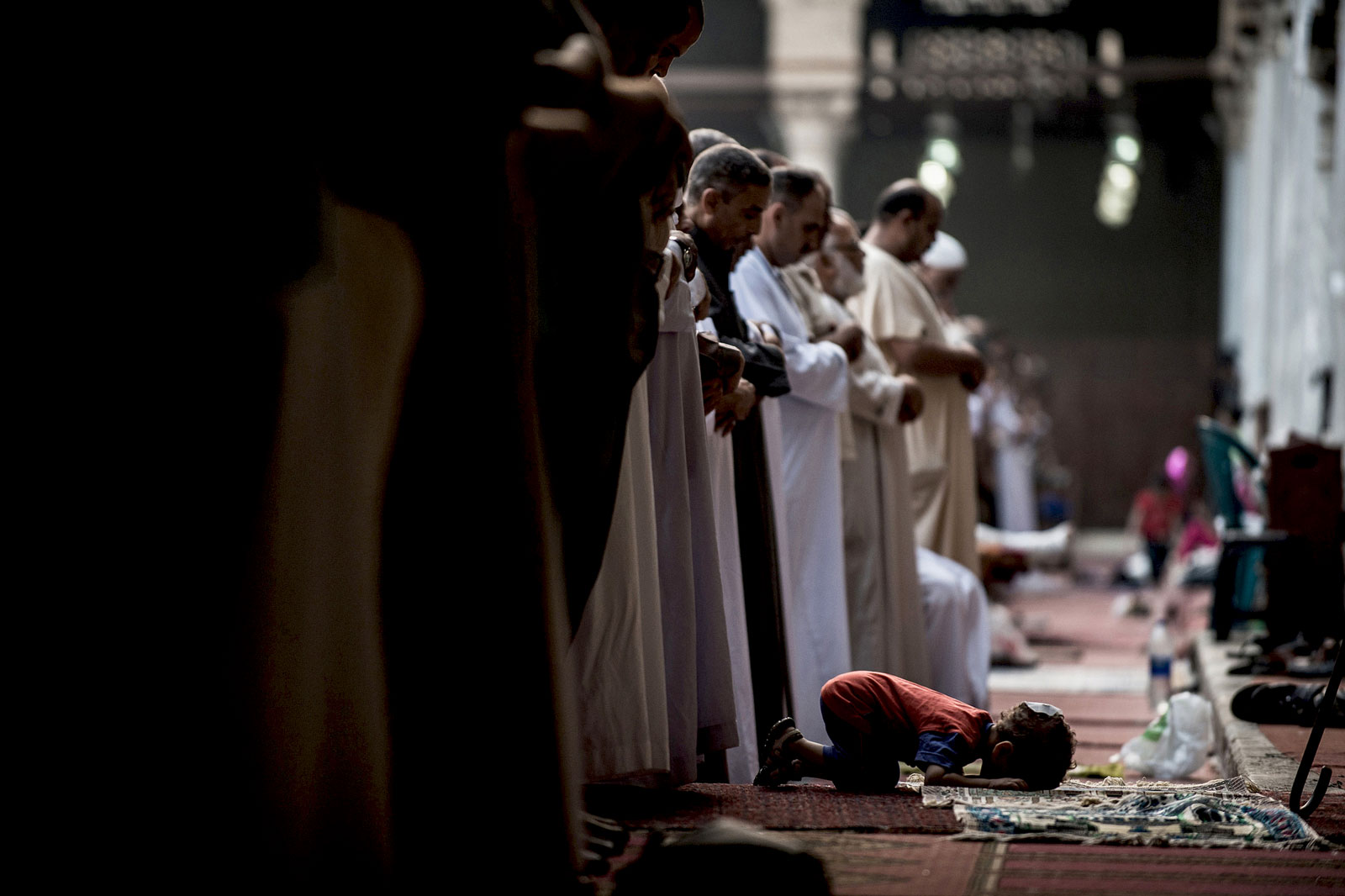 There is an obligation of the five prayers. Prayer is the most obligatory of the Five Pillars of Islam next to the Two Testifications of Faith, and it was ordained in the best and the most perfect way for an act of worship. Prayer includes many of the acts of worship, like the remembrance of Allah, the recitation of the Qur’an, standing humbly before Almighty Allah, bowing, prostration, supplication, and takbir (saying Allah is the Greatest).

Prayer is also the head of the physical acts of worship, of which none of the religions brought by any of Allah’s Messengers is void, Prayer, unlike all other acts of worship, was enjoined by Allah on His Messenger, Muhammad (PBUH), the Seal of Messengers, on the Night of Al-Mi’raj (Muhammad’s Ascension, see Al-Bukhari 7517 and Muslim 409). This is an indication of its greatness, a confirmation of its being obligatory, and a sign of its high status in the Sight of Allah.

There are many hadiths indicating the virtues of prayer and showing its being obligatory on all Muslim individuals. The fact that prayer is an obligatory act of worship is primarily known in Islam. So, whoever denies this tact is considered to be an apostate; such a person is to be asked to recant, and if he does not, he is to be killed as unanimously agreed upon by Muslim scholars.

Linguistically, prayer means invocation; Allah, Exalted be He commands the Prophet to ‘pray’ for the believers, saying:

According to the Shari’ah (Islamic Law), prayer is defined as a special kind of sayings and deeds beginning with takbir and ending with taslim. It is called ‘prayer’ because it includes invocation; during prayer, the worshiper is in a state of invocation through worshiping Allah, praising Him, or supplicating Him for something. This is why it is called prayer. Prayer was decreed by Allah on the Night of Al-Mi’raj, before Hijrah, as five prayers to be performed everyday and night at specified times by every legally accountable Muslim. Allah, Exalted be He, says:

“…Indeed, prayer has been decreed upon the believers a decree of specified times? – Qur’an 4:103

Those prayer times are the times pointed out by Allah’s Messenger (PBUH) through his words or his deeds (i.e. through the Sunnah), Allah, Exalted be He, also says:

“And they were not commanded except to worship Allah [being] sincere to Him in religion, inclining to truth, and to establish prayer. – Qur’an 98:5

In addition, in many verses of Allah’s Glorious Book (the Qur’an), Allah, Exalted be He, says:

“[O Muhammad], tell My servants who have believed to establish prayer.” – Qur’an 3:31

Moreover, Allah, Glorified be He, says:

Therefore, it is obligatory for whoever reaches one of the specified times of prayer, being adult and sane, to perform it, excluding women in a state of menstruation or postnatal bleeding. Scholars unanimously agree that it is not obligatory for women in the aforesaid two cases to perform prayer, nor to perform it later after purification. On the other hand, whoever is in a state of unconsciousness, as in sleeping, fainting, and the like, has to perform the prayer(s) he/she has missed when he/she wakes up. Allah, Exalted be He, says:

In addition, the Prophet (PBUH) says:

“Whoever misses a prayer out of oversleeping or forgetfulness let him perform it once he remembers it.” – Sahih Al-Bukhari 597, Sahih Muslim 1566.

A guardian of a child has to command him to perform prayer when the child reaches the age of seven, though it is still not obligatory for him. But the purpose is to make the child interested in prayer and used to it. Thus, the child and his guardian will be rewarded when the former performs prayer, for Allah, Exalted be He, says in general:

“Whoever comes [on the Day ofJudgment] with a good deed will have ten times the like thereof [to his credit].” – Qur’an 6:160

Moreover, when a woman showed the Prophet (PBUH) a young boy who was with her saying:

“Does this one have to perform Hajj (Pilgrimage), O Messenger of Allah?” He (PBUH) replied, “Yes, and you will have a reward.” – Sahih Muslim 3240.

“Command your children to perform prayer when they become seven years old, and beat them for (not performing) it (i.e. prayer) when they become ten years old; and arrange their beds (so that boys and girls sleep) separately).” – Ahmad 6753, Abu Dawud 495, At-Tirmidhi 407.

It is also impermissible to perform prayer later than its due time, for Allah, Exalted be He, says:

“…Indeed prayer has been decreed upon the believers a decree of specified times?” – Qur’an 4:103

The meaning is that prayer has specified times at which it has to be performed. A prayer is impermissible to be deferred except for those who would like to combine it with the following prayer, provided that the said prayer can be combined with another, and that the case is among those in which combining two prayers is permissible as well as the person being one who is allowed to combine prayers in this way. As for delaying performing a night prayer until the morning, a day prayer until the night, or the Fajr (Dawn) Prayer until sunrise, it is by no means permissible, whether the reason is a state of major ritual impurity, minor ritual impurity, or anything else. Rather, one has to perform them at their specified times, regardless of one’s state.

A person might happen to be detained in hospital where he is confined to a bed that he cannot leave to pray, or cannot change the impure clothes he wears, or cannot find pure earth to perform tayammum (dry ablution) instead of ablution to pray. Some ignorant people in this case defer prayer on the pretext that they will perform it later when possible. In fact, this is a grave mistake and a means of missing prayer whose reason is unawareness and lack of juristic consultation. What they have to do is to perform prayer at its specified times regardless of their states. Their prayer will be sufficient, even if it is performed without tayammum or in impure clothes; Allah, Exalted be He, says:

Even if they pray without facing the qiblah, provided they are unable to face it, their prayer is still valid.

As regards those who abandon performing prayer out of negligence or slackness, even if without denying the fact that it is obligatory, they are considered disbelievers according to the more valid of the two juristic opinions in this regard. This is what is indicated in the prophetic hadiths, like the one related by Imam Muslim that states:

“Verily, between man and between polytheism and disbelief is the negligence of prayer.” – Sahih Muslim 243

There are many other legal proofs. Those who abandon prayer are to be pointed out among people so as to be ashamed of themselves and perform prayer. In addition to this, they are to be discarded to the extent that they are not to be greeted and their invitations are not to be accepted until they repent and establish regular prayer. This is because prayer is the basic pillar of religion, and the main difference between a Muslim and a disbeliever. So, whatever good deeds one might do are useless if one is negligent of prayer, we ask Allah for safety.

Read – “How to pray like Prophet Muhammad (pbuh)”, which is based on authentic hadith.

The Rulings on Friday Prayer

How to Perform Witr Prayer?