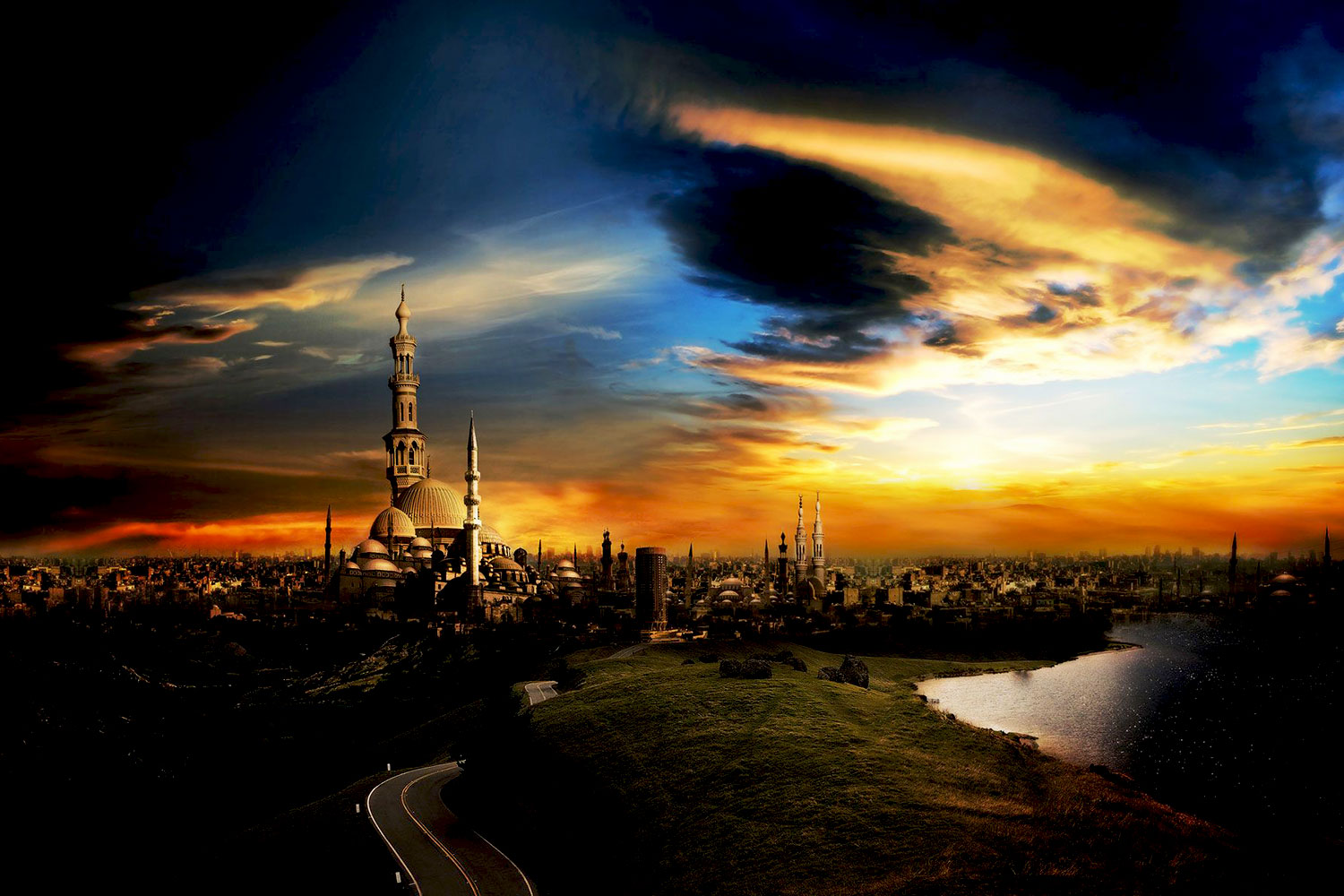 Allah is exclusively the God of Islam!

Jihad is an offensive Holy War!

Jihad جهاد in Arabic does not mean “holy war.” It means “to strive, to apply oneself, to struggle, to persevere.” Jihad can be personal or it can be a community of persons struggling against oppression. In essence, it means to become closer to God in lifestyle and community. This type of struggle (jihad) is to ensure that a peaceful and equitable community continues to exist. Defensive means are acceptable to safeguard the community however offensive aggression is strictly prohibited. The Arabic word for fighting is qital and harb means war. Jihad in any form is mentioned 28 times in the Qur’an and qital/harb (fighting/war) are mentioned 94 times in the Qur’an. Some sources claim jihad is mentioned as much as 164 times, but this is incorrect. Combining fighting, war, struggle and similar connotations may equate to 164 (in the Qur’an) but all of these are not representative of jihad. Extremist leaders and islamophobes, each on opposite sides of the spectrum, have changed, edited or misinterpreted the Qur’an to suit their needs.

Slavery is acceptable and slave females have no rights!

Slavery is accepted only in certain situations in war or when a direct physical threat exists. The Qur’an surah (90:13) states that those freeing a slave (whenever feasible) are blessed people in the eyes of God. Further, three Qur’an surahs (4:36), (9:60), (24:58) urge kindness to slaves. With regards to female slaves, it is quite clear: surah (4:24) states “and also prohibited to you are all married women except those your right hands possess. This is the decree of God upon you. And lawful to you are all others i.e. slave girls beyond these, provided that you seek them in marriage with gifts from your property, desiring chastity, not unlawful sexual intercourse. So for whatever you enjoy of marriage from them, give them their due compensation as an obligation. And there is no blame upon you for what you mutually agree to beyond the obligation.” Surah (24:33) states “make a contract with them if you know there is within them goodness and give them from the wealth of God which He has given you. And do not compel your slave girls to prostitution.” Isis has changed and/or misinterpreted such verses to endorse rape.

As a religious scholar, I’ve read the Qur’an numerous times. Yet I have been studying in more detail the various interpretations of the verses containing whom your right hand possesses (slave girls). What I find is that prostitution is forbidden and there is no direct reference to allowing frivolous sexual relations (certainly not rape) with slave girls.

The Qur’an and the plausible hadith (sayings of the Prophet) collections are conclusive regarding suicide being forbidden. Surah (4:29) states: “Nor kill (or destroy) yourselves” and surah (2:195) says: “And do not throw yourselves in destruction” are just two of the many examples. A weak and unreliable hadith does mention 80,000 servants and 72 wives but no such mention of 72 virgins. Muslims are expected to ignore such unreliable sayings. There are similarities in Christianity as there are hundreds of books not in the canon and likewise Christians are expected to ignore such (especially odd or strange) precepts.

Aisha was age 9 when she married Muhammad (pbuh)!

First it is important to provide some background information: Muhammad (pbuh) was married to an older woman Khadija (ra) (a widow) for 25 years and maintained a monogamous relationship until her death. When the Muslims were forced to move from Mecca to Yathrib (re-named Medina literally meaning the city but later construed to mean the city of the prophet), Muhammad (pbuh) had studied and practiced some Judaism as Arab Jews had occupied Yathrib/Medina for many years. Early Judaism allowed polygamy. Some of examples of this include the early patriarchs of the faith like Lamech, Abraham, Esau, Jacob, David, Solomon to name a few. Further, the Mosaic Law specifically permitted polygamy in Exodus (21:10), Leviticus (19:20) and Deuteronomy (21:15-17).

It is only logical to assume that since Muhammad (pbuh) was monogamous for many years with Khadija (ra), that Judaism influenced his acceptance of polygamy. However, Muhammad (pbuh) only married widows (most of which lost husbands in battle) with the exception of Aisha. Aisha is not mentioned by name in the Qur’an but this does not mean she didn’t exist. She is mentioned in other sources like the hadith collection. The tribal expectations of that era were very stringent regarding sexual relations and girls were expected to reach puberty before consummation. It is possible Aisha (ra) reached puberty at an early age but much older than 9. Records of ages in the 7th century are inaccurate. Aisha (ra) is said to have joined Muhammad (pbuh) during the Battle of Badr, in 624 CE. However, because no one below the age of fifteen was allowed to accompany solders in battle, Aisha (ra) should have been at least fifteen in 624 CE and thus at least thirteen when she was married following the Hijra in 622 CE.

A prime example of the inconsistencies of age records during the antiquity period would be Mary, mother of Jesus (pbuh). Some sources have Joseph (pbuh) being 90 years of age and Mary being 12. Mary was likely older probably 13-15 when she married Joseph (pbuh) who was probably much younger than 90. Modern day rules did not apply to the antiquity era which includes 7th century Arabia. The only expectation for females and marriage was reaching puberty.

Punishment for Apostasy in Islam is death!

When it comes to an apostate in Islam, the Qur’an Sura 2:256 is very clear which states that “there is to be no coercion in matters of religion.” However, Sura 9:5 says “And when the sacred months have passed, then kill the polytheists wherever you find them and capture them and besiege them and sit in wait for them at every place of ambush. But if they should repent, establish prayer let them go on their way.”

This verse describes a difficult time when the polytheist Meccan Quraysh tribe and some Arab Jewish clans were pressuring and attacking the Muslims. Muhammad (pbuh) was a mediator among the fighting Jewish and pagan clans in Medina and had worked out a truce but some of these clans were uncomfortable with the arrangement and broke the truce. The polytheist Quraysh and some of the Arab Jewish clans conspired together and made several attempts on Muhammad’s life and on one occasion, came within one bite of poisoning him. Extremists take this verse out of context and incorrectly believe that murdering any non-Muslim is the decree here.

Isis members blatantly ignore the Qur’an, as an example, surah (49:13) says, “O Mankind. We created you from a single pair of a male and a female and made you into nations and tribes that you may know each other. Verily the most honored of you in the sight of God is the most righteous of you.” Islam mandates the collaboration with persons of different faiths, cultures and races. Yet Isis and other extremist groups take verses of the Qur’an out of context to allow killing innocent people. Ignoring the solid Quranic dictate in surah (5:32) which says, “If anyone kills a person, it is as if he kills all mankind while if anyone saves a life it is as if he saves the lives of all mankind.” And surah (2:256) says “There shall be no compulsion in religion.” The leaders of Isis, with their warped agenda recruit young men who are desperate, improvised, and poor. They lack meaning and direction in life and have little or no knowledge of the religion that claim to represent. The leaders slightly change and/or deliberately misinterpret the verses in the Qur’an and pass this information off to the new unwary young members of Isis.

An example of this are the Isis terrorists Yusuf Sarwar and Mohammed Ahmed, just before pleading guilty to terrorism, they bought ‘Islam for Dummies’ on Amazon. Religious illiteracy, without a doubt plays a huge part in extremism (not just Islam but in all major religions). An article from the statesman noted that, “far from being religious zealots, a large number of those involved in terrorism do not practice their faith regularly. Many lack religious literacy and could be regarded as religious novices.” Further, the analysts concluded that “a well-established religious identity actually protects against violent radicalization.”

Jesus is extraneous in Islam!

Jesus is a revered prophet and messiah in Islam. The Islamic tradition believes Jesus will return as messiah and defeat the anti-Christ. This eschatological view is similar in Christianity. Muslims also believe in the resurrection as do Christians with the difference being that Jesus did not die on the cross. Unlike Christians, Muslims do not however believe Jesus is divine and son of God.

Sharia Law is archaic and cruel!

Sharia law or Islamic law is about protecting the innocent and upholding Islamic values. This includes prayer, charity and fasting (to remember those in the world who don’t have enough to eat) during the holy season of Ramadan. Sharia Law is not about extreme punishments for minor offenses. Where the confusion lies is that the penalties for offenses during the early Islamic period (during Muhammad’s (pbuh) life and sooner thereafter) seemed cruel however the Islamic laws of this period were leaps and bounds above pre-Islamic Arabia. Pre-Islamic Arabia was tribal and vindictive. There were no formal laws or rules. The tribes were male dominated. Women, with a few rare exceptions, had no rights and were viewed as sex objects only. For the smallest reasons, young girls were buried alive. There were no formal governments whatsoever. Flogging for minor offenses in the early Islamic period might seem harsh but in pre-Islamic Arabia, certain death would come as a consequence.

In modern times, extremists believe applying the early archaic Islamic laws are appropriate however humanity has significantly advanced through education in the modern era. We have gained a greater understanding of mental illness, as well as recognized the importance of equal rights for women and gays. And, most importantly, we have reached a greater comprehension in the use of contemporary rehabilitation protocols and therefore have gained a higher success rate. In short, there is no need for such harsh punishments to rehabilitate a person. This understanding did not exist in the early Islamic society and for that matter did not exist in any society during the antiquity period.

Islamic scholars in the USA see no conflict with Muslim values and the US constitution and the bill of rights. Professor of law Marshall Breger at Catholic University suggests Jewish law Halacha is very similar to Islamic Sharia law.

Interestingly as well, a study was done at George Washington University to see which countries closely uphold Islamic values. Ireland, Denmark, Luxembourg and New Zealand were the top 4. The first country with a Muslim majority, Malaysia is at number 33, and Kuwait is at 48. Hossein Askari, an Iranian-American scholar is quoted by saying “We must emphasize that many countries that profess Islam and are called Islamic are unjust, corrupt, and underdeveloped and are in fact not ‘Islamic’ by any stretch of the imagination.”