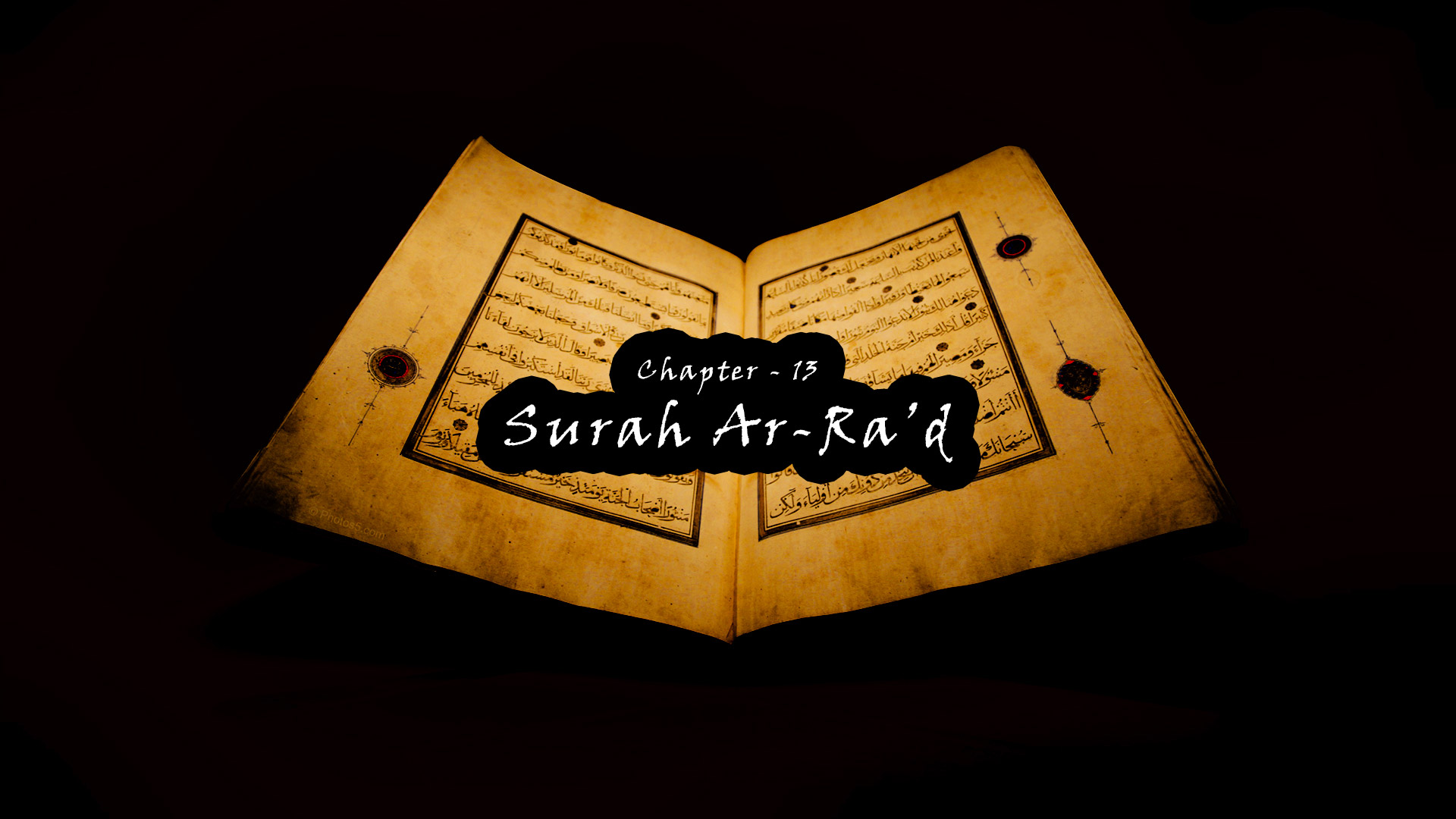 1. Alif, Lam, Meem, Ra. These are the verses of the Book; and what has been revealed to you from your Lord is the truth, but most of the people do not believe.

2. It is Allah who erected the heavens without pillars that you [can] see; then He established Himself above the Throne and made subject the sun and the moon, each running [its course] for a specified term. He arranges [each] matter; He details the signs that you may, of the meeting with your Lord, be certain.

3. And it is He who spread the earth and placed therein firmly set mountains and rivers; and from all of the fruits He made therein two mates; He causes the night to cover the day. Indeed in that are signs for a people who give thought.

4. And within the land are neighboring plots and gardens of grapevines and crops and palm trees, [growing] several from a root or otherwise, watered with one water; but We make some of them exceed others in [quality of] fruit. Indeed in that are signs for a people who reason.

5. And if you are astonished, [O Muhammad] – then astonishing is their saying, “When we are dust, will we indeed be [brought] into a new creation?” Those are the ones who have disbelieved in their Lord, and those will have shackles upon their necks, and those are the companions of the Fire; they will abide therein eternally.

7. And those who disbelieved say, “Why has a sign not been sent down to him from his Lord?” You are only a warner, and for every people is a guide.

8. Allah knows what every female carries and what the wombs lose [prematurely] or exceed. And everything with Him is by due measure.

9. [He is] Knower of the unseen and the witnessed, the Grand, the Exalted.

10. It is the same [to Him] concerning you whether one conceals [his] speech or one publicizes it and whether one is hidden by night or conspicuous [among others] by day.

11. For him [i.e., each one] are successive [angels] before and behind him who protect him by the decree of Allah. Indeed, Allah will not change the condition of a people until they change what is in themselves. And when Allah intends for a people ill, there is no repelling it. And there is not for them besides Him any patron.

12. It is He who shows you lightening, [causing] fear and aspiration, and generates the heavy clouds.

13. And the thunder exalts [Allah] with praise of Him – and the angels [as well] from fear of Him – and He sends thunderbolts and strikes there with whom He wills while they dispute about Allah; and He is severe in assault.

14. To Him [alone] is the supplication of truth. And those they call upon besides Him do not respond to them with a thing, except as one who stretches his hands toward water [from afar, calling it] to reach his mouth, but it will not reach it [thus]. And the supplication of the disbelievers is not but in error [i.e., futility].

15. And to Allah prostrates whoever is within the heavens and the earth, willingly or by compulsion, and their shadows [as well] in the mornings and the afternoons.

16. Say, “Who is Lord of the heavens and earth?” Say, “Allah.” Say, “Have you then taken besides Him allies not possessing [even] for themselves any benefit or any harm?” Say, “Is the blind equivalent to the seeing? Or is darkness equivalent to light? Or have they attributed to Allah partners who created like His creation so that the creation [of each] seemed similar to them?” Say, “Allah is the Creator of all things, and He is the One, the Prevailing.”

17. He sends down from the sky, rain, and valleys flow according to their capacity, and the torrent carries a rising foam. And from that [ore] which they heat in the fire, desiring adornments and utensils, is a foam like it. Thus Allah presents [the example of] truth and falsehood. As for the foam, it vanishes, [being] cast off; but as for that which benefits the people, it remains on the earth. Thus does Allah present examples.

18. For those who have responded to their Lord is the best [reward], but those who did not respond to Him – if they had all that is in the earth entirely and the like of it with it, they would [attempt to] ransom themselves thereby. Those will have the worst account, and their refuge is Hell, and wretched is the resting place.

19. Then is he who knows that what has been revealed to you from your Lord is the truth like one who is blind? They will only be reminded who are people of understanding –

20. Those who fulfill the covenant of Allah and do not break the contract,

21. And those who join that which Allah has ordered to be joined and fear their Lord and are afraid of the evil of [their] account,

22. And those who are patient, seeking the countenance of their Lord, and establish prayer and spend from what We have provided for them secretly and publicly and prevent evil with good – those will have the good consequence of [this] home –

23. Gardens of perpetual residence; they will enter them with whoever were righteous among their fathers, their spouses and their descendants. And the angels will enter upon them from every gate, [saying],

24. “Peace [i.e., security] be upon you for what you patiently endured. And excellent is the final home.”

25. But those who break the covenant of Allah after contracting it and sever that which Allah has ordered to be joined and spread corruption on earth – for them is the curse, and they will have the worst home.

26. Allah extends provision for whom He wills and restricts [it]. And they rejoice in the worldly life, while the worldly life is not, compared to the Hereafter, except [brief] enjoyment.

27. And those who disbelieved say, “Why has a sign not been sent down to him from his Lord?” Say, [O Muhammad], “Indeed, Allah leaves astray whom He wills and guides to Himself whoever turns back [to Him] –

29. Those who have believed and done righteous deeds – a good state is theirs and a good return.

30. Thus have We sent you to a community before which [other] communities have passed on so you might recite to them that which We revealed to you, while they disbelieve in the Most Merciful. Say, “He is my Lord; there is no deity except Him. Upon Him I rely, and to Him is my return.”

31. And if there was any Qur’an [i.e., recitation] by which the mountains would be removed or the earth would be broken apart or the dead would be made to speak, [it would be this Qur’an], but to Allah belongs the affair entirely. Then have those who believed not accepted that had Allah willed, He would have guided the people, all of them? And those who disbelieve do not cease to be struck, for what they have done, by calamity – or it will descend near their home – until there comes the promise of Allah. Indeed, Allah does not fail in [His] promise.

32. And already were [other] messengers ridiculed before you, and I extended the time of those who disbelieved; then I seized them, and how [terrible] was My penalty.

33. Then is He who is a maintainer of every soul, [knowing] what it has earned, [like any other]? But to Allah they have attributed partners. Say, “Name them. Or do you inform Him of that588 which He knows not upon the earth or of what is apparent [i.e., alleged] of speech?” Rather, their [own] plan has been made attractive to those who disbelieve, and they have been averted from the way. And whomever Allah leaves astray – there will be for him no guide.

34. For them will be punishment in the life of [this] world, and the punishment of the Hereafter is more severe. And they will not have from Allah any protector.

36. And [the believers among] those to whom We have given the [previous] Scripture rejoice at what has been revealed to you, [O Muhammad], but among the [opposing] factions are those who deny part of it [i.e., the Qur’an]. Say, “I have only been commanded to worship Allah and not associate [anything] with Him. To Him I invite, and to Him is my return.”

37. And thus We have revealed it as an Arabic legislation. And if you should follow their inclinations after what has come to you of knowledge, you would not have against Allah any ally or any protector.

38. And We have already sent messengers before you and assigned to them wives and descendants. And it was not for a messenger to come with a sign except by permission of Allah. For every term is a decree.

39. Allah eliminates what He wills or confirms, and with Him is the Mother of the Book.

40. And whether We show you part of what We promise them or take you in death, upon you is only the [duty of] notification, and upon Us is the account.

41. Have they not seen that We set upon the land, reducing it from its borders? And Allah decides; there is no adjuster of His decision. And He is swift in account.

42. And those before them had plotted, but to Allah belongs the plan entirely. He knows what every soul earns, and the disbelievers will know for whom is the final home.

43. And those who have disbelieved say, “You are not a messenger.” Say, [O Muhammad], “Sufficient is Allah as Witness between me and you, and [the witness of] whoever has knowledge of the Scripture.”