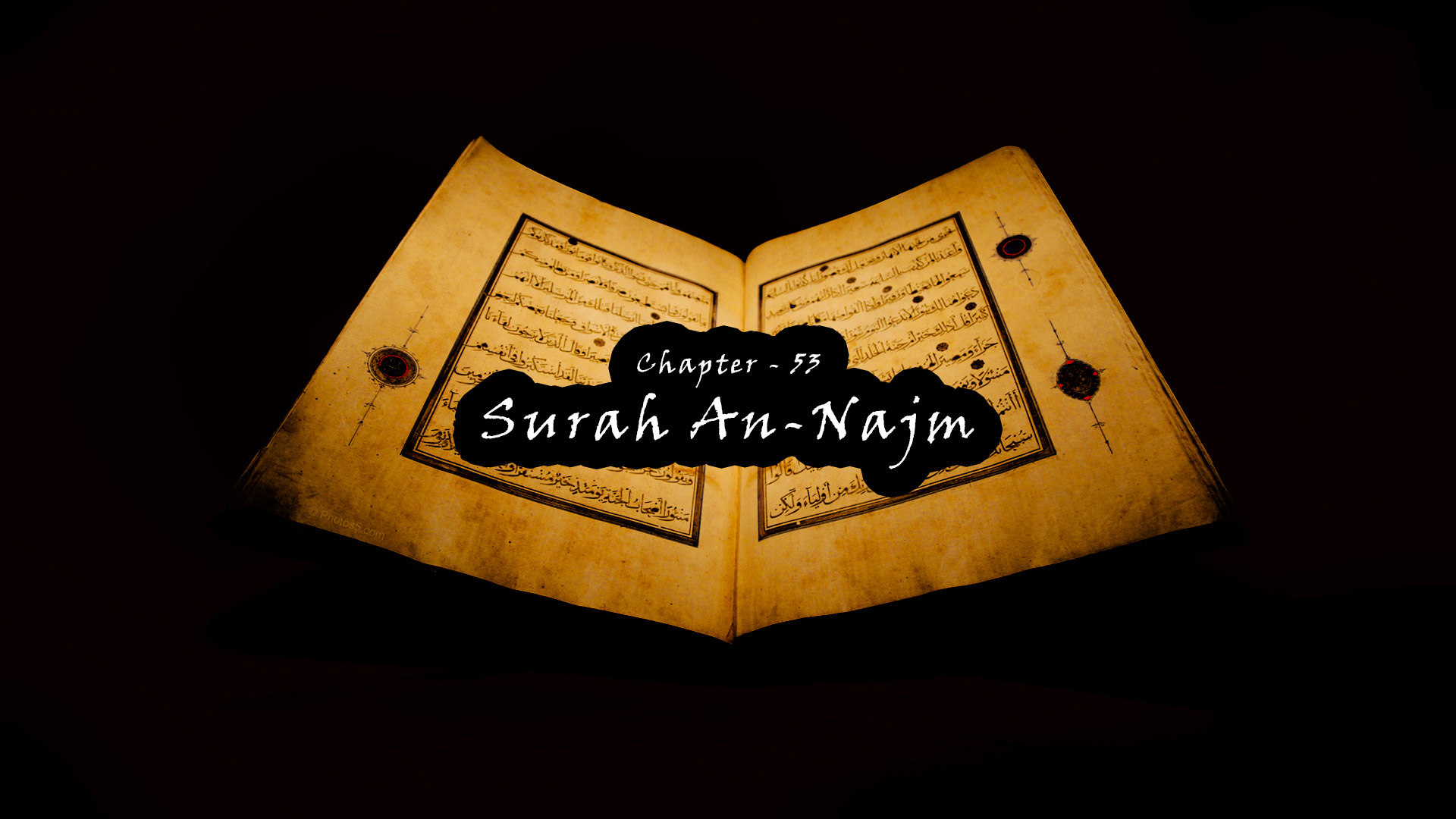 1. By the star when it descends,

2. Your companion [i.e., Muhammad] has not strayed, nor has he erred,

3. Nor does he speak from [his own] inclination.

4. It is not but a revelation revealed,

6. One of soundness. And he rose to [his] true form

7. While he was in the higher [part of the] horizon.

8. Then he approached and descended

9. And was at a distance of two bow lengths or nearer.

12. So will you dispute with him over what he saw?

13. And he certainly saw him in another descent

14. At the Lote Tree of the Utmost Boundary –

16. When there covered the Lote Tree that which covered [it].

17. The sight [of the Prophet (pbuh)] did not swerve, nor did it transgress [its limit].

18. He certainly saw of the greatest signs of his Lord.

19. So have you considered al-Lat and al-‘Uzza?

21. Is the male for you and for Him the female?

23. They are not but [mere] names you have named them – you and your forefathers – for which Allah has sent down no authority. They follow not except assumption and what [their] souls desire, and there has already come to them from their Lord guidance.

24. Or is there for man whatever he wishes?

25. Rather, to Allah belongs the Hereafter and the first [life].

26. And how many angels there are in the heavens whose intercession will not avail at all except [only] after Allah has permitted [it] to whom He wills and approves.

27. Indeed, those who do not believe in the Hereafter name the angels female names,

28. And they have thereof no knowledge. They follow not except assumption, and indeed, assumption avails not against the truth at all.

29. So turn away from whoever turns his back on Our message and desires not except the worldly life.

32. Those who avoid the major sins and immoralities, only [committing] slight ones. Indeed, your Lord is vast in forgiveness. He was most knowing of you when He produced you from the earth and when you were fetuses in the wombs of your mothers. So do not claim yourselves to be pure; He is most knowing of who fears Him.

33. Have you seen the one who turned away

35. Does he have knowledge of the unseen, so he sees?

36. Or has he not been informed of what was in the scriptures of Moses

38. That no bearer of burdens will bear the burden of another

39. And that there is not for man except that [good] for which he strives

41. Then he will be recompensed for it with the fullest recompense –

42. And that to your Lord is the finality

44. And that it is He who causes death and gives life

45. And that He creates the two mates – the male and female –

46. From a sperm-drop when it is emitted

48. And that it is He who enriches and suffices

49. And that it is He who is the Lord of Sirius

50. And that He destroyed the first [people of] ‘Aad

52. And the people of Noah before. Indeed, it was they who were [even] more unjust and oppressing.

53. And the overturned towns He hurled down

54. And covered them by that which He covered.

55. Then which of the favors of your Lord do you doubt?

57. The Approaching Day has approached.

59. Then at this statement do you wonder?

61. While you are proudly sporting?

62. So prostrate to Allah and worship [Him].