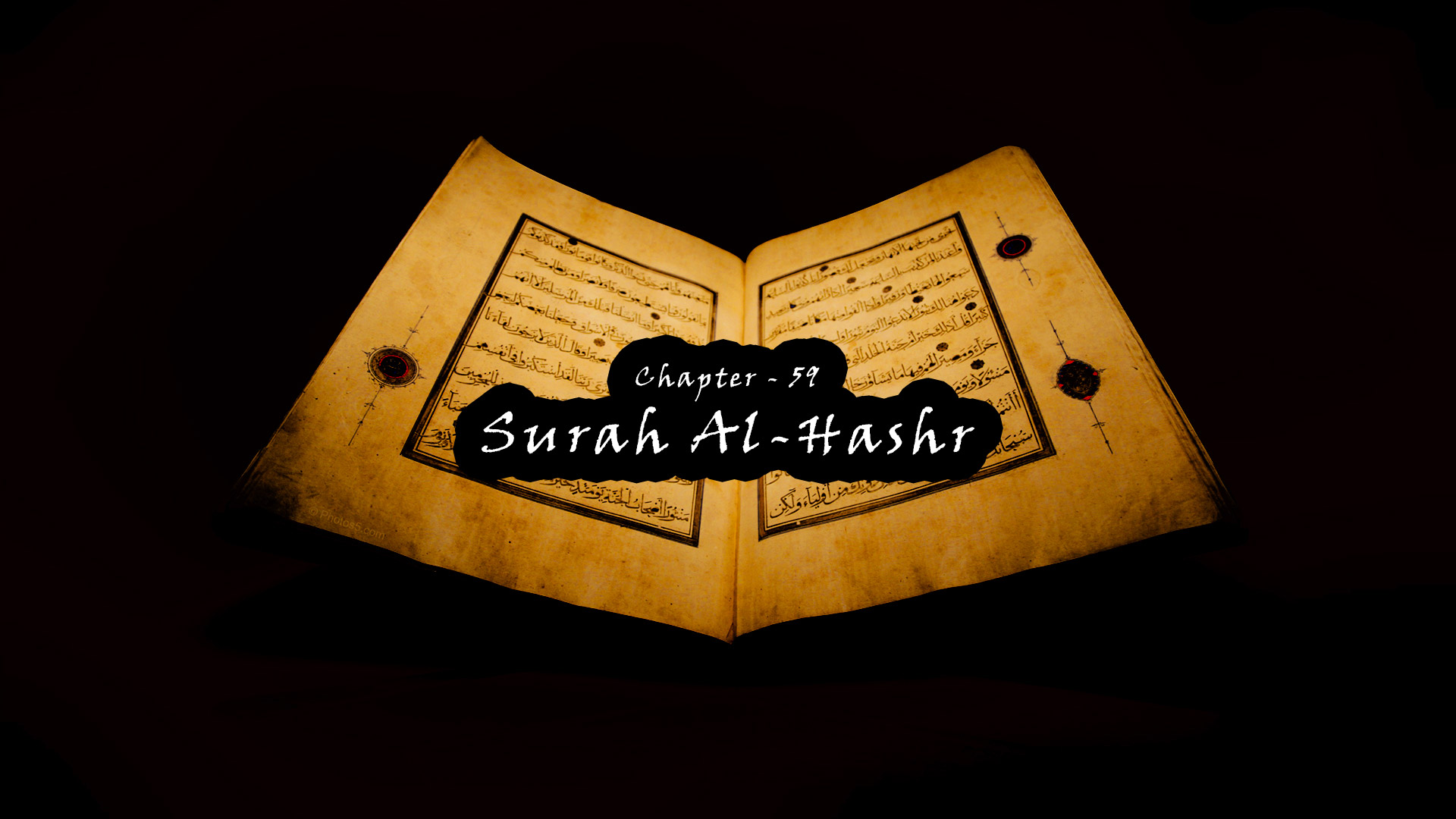 1. Whatever is in the heavens and whatever is on the earth exalts Allah, and He is the Exalted in Might, the Wise.

2. It is He who expelled the ones who disbelieved among the People of the Scripture from their homes at the first gathering. You did not think they would leave, and they thought that their fortresses would protect them from Allah; but [the decree of] Allah came upon them from where they had not expected, and He cast terror into their hearts [so] they destroyed their houses by their [own] hands and the hands of the believers. So take warning, O people of vision.

3. And if not that Allah had decreed for them evacuation, He would have punished them in [this] world, and for them in the Hereafter is the punishment of the Fire.

4. That is because they opposed Allah and His Messenger. And whoever opposes Allah – then indeed, Allah is severe in penalty.

5. Whatever you have cut down of [their] palm trees or left standing on their trunks – it was by permission of Allah and so He would disgrace the defiantly disobedient.

6. And what Allah restored [of property] to His Messenger from them – you did not spur for it [in an expedition] any horses or camels, but Allah gives His messengers power over whom He wills, and Allah is over all things competent.

7. And what Allah restored to His Messenger from the people of the towns – it is for Allah and for the Messenger and for [his] near relatives and orphans and the [stranded] traveler – so that it will not be a perpetual distribution among the rich from among you. And whatever the Messenger has given you – take; and what he has forbidden you – refrain from. And fear Allah; indeed, Allah is severe in penalty.

8. For the poor emigrants who were expelled from their homes and their properties, seeking bounty from Allah and [His] approval and supporting Allah and His Messenger, [there is also a share]. Those are the truthful.

9. And [also for] those who were settled in the Home [i.e., al-Madinah] and [adopted] the faith before them. They love those who emigrated to them and find not any want in their breasts of what they [i.e., the emigrants] were given but give [them] preference over themselves, even though they are in privation. And whoever is protected from the stinginess of his soul – it is those who will be the successful.

10. And [there is a share for] those who came after them, saying, “Our Lord, forgive us and our brothers who preceded us in faith and put not in our hearts [any] resentment toward those who have believed. Our Lord, indeed You are Kind and Merciful.”

11. Have you not considered those who practice hypocrisy, saying to their brothers [i.e., associates] who have disbelieved among the People of the Scripture, “If you are expelled, we will surely leave with you, and we will not obey, in regard to you, anyone – ever; and if you are fought, we will surely aid you.” But Allah testifies that they are liars.

13. You [believers] are more fearful within their breasts than Allah. That is because they are a people who do not understand.

14. They will not fight you all except within fortified cities or from behind walls. Their violence [i.e., enmity] among themselves is severe. You think they are together, but their hearts are diverse. That is because they are a people who do not reason.

15. [Theirs is] like the example of those shortly before them: they tasted the bad consequence of their affair, and they will have a painful punishment.

16. [The hypocrites are] like the example of Satan when he says to man, “Disbelieve.” But when he disbelieves, he says, “Indeed, I am disassociated from you. Indeed, I fear Allah, Lord of the worlds.”

17. So the outcome for both of them is that they will be in the Fire, abiding eternally therein. And that is the recompense of the wrongdoers.

18. O you who have believed, fear Allah. And let every soul look to what it has put forth for tomorrow – and fear Allah. Indeed, Allah is Acquainted with what you do.

19. And be not like those who forgot Allah, so He made them forget themselves. Those are the defiantly disobedient.

21. If We had sent down this Qur’an upon a mountain, you would have seen it humbled and splitting from fear of Allah. And these examples We present to the people that perhaps they will give thought.

22. He is Allah, other than whom there is no deity, Knower of the unseen and the witnessed. He is the Entirely Merciful, the Especially Merciful.

23. He is Allah, other than whom there is no deity, the Sovereign, the Pure, the Perfection, the Bestower of Faith, the Overseer, the Exalted in Might, the Compeller, the Superior. Exalted is Allah above whatever they associate with Him.

24. He is Allah, the Creator, the Inventor, the Fashioner; to Him belong the best names. Whatever is in the heavens and earth is exalting Him. And He is the Exalted in Might, the Wise.