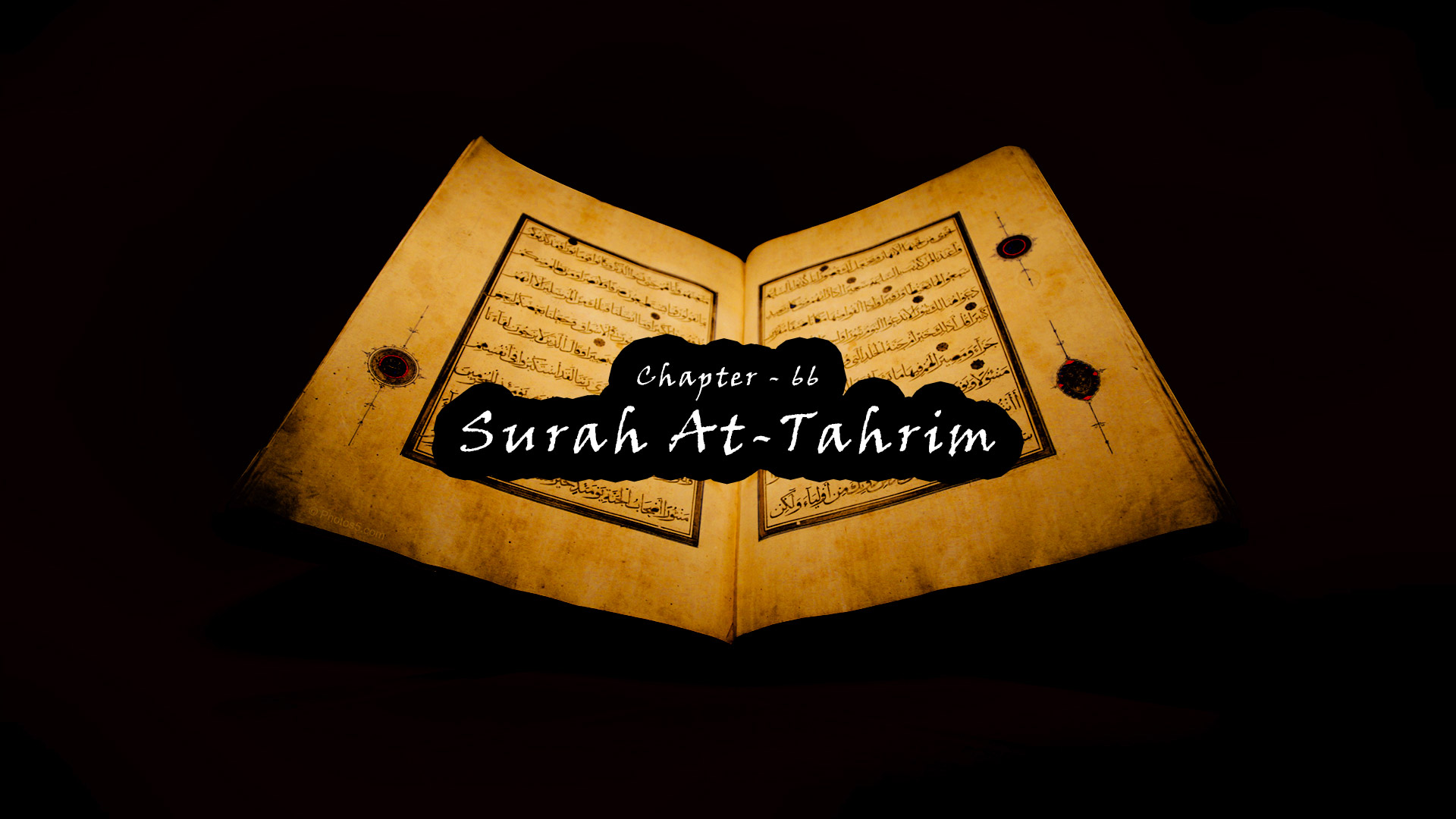 1. O Prophet, why do you prohibit [yourself from] what Allah has made lawful for you, seeking the approval of your wives? And Allah is Forgiving and Merciful.

2. Allah has already ordained for you [Muslims] the dissolution of your oaths. And Allah is your protector, and He is the Knowing, the Wise.

3. And [remember] when the Prophet confided to one of his wives a statement; and when she informed [another] of it and Allah showed it to him, he made known part of it and ignored a part. And when he informed her about it, she said, “Who told you this?” He said, “I was informed by the Knowing, the Acquainted.”

4. If you two [wives] repent to Allah, [it is best], for your hearts have deviated. But if you cooperate against him – then indeed Allah is his protector, and Gabriel and the righteous of the believers and the angels, moreover, are [his] assistants.

5. Perhaps his Lord, if he divorced you [all], would substitute for him wives better than you – submitting [to Allah], believing, devoutly obedient, repentant, worshipping, and traveling – [ones] previously married and virgins.

6. O you who have believed, protect yourselves and your families from a Fire whose fuel is people and stones, over which are [appointed] angels, harsh and severe; they do not disobey Allah in what He commands them but do what they are commanded.

7. O you who have disbelieved, make no excuses that Day. You will only be recompensed for what you used to do.

8. O you who have believed, repent to Allah with sincere repentance. Perhaps your Lord will remove from you your misdeeds and admit you into gardens beneath which rivers flow [on] the Day when Allah will not disgrace the Prophet and those who believed with him. Their light will proceed before them and on their right; they will say, “Our Lord, perfect for us our light and forgive us. Indeed, You are over all things competent.”

9. O Prophet, strive against the disbelievers and the hypocrites and be harsh upon them. And their refuge is Hell, and wretched is the destination.

10. Allah presents an example of those who disbelieved: the wife of Noah and the wife of Lot. They were under two of Our righteous servants but betrayed them, so they [i.e., those prophets] did not avail them from Allah at all, and it was said, “Enter the Fire with those who enter.”

11. And Allah presents an example of those who believed: the wife of Pharaoh, when she said, “My Lord, build for me near You a house in Paradise and save me from Pharaoh and his deeds and save me from the wrongdoing people.”

12. And [the example of] Mary, the daughter of ‘Imran, who guarded her chastity, so We blew into [her garment] through Our angel [i.e., Gabriel], and she believed in the words of her Lord and His scriptures and was of the devoutly obedient.