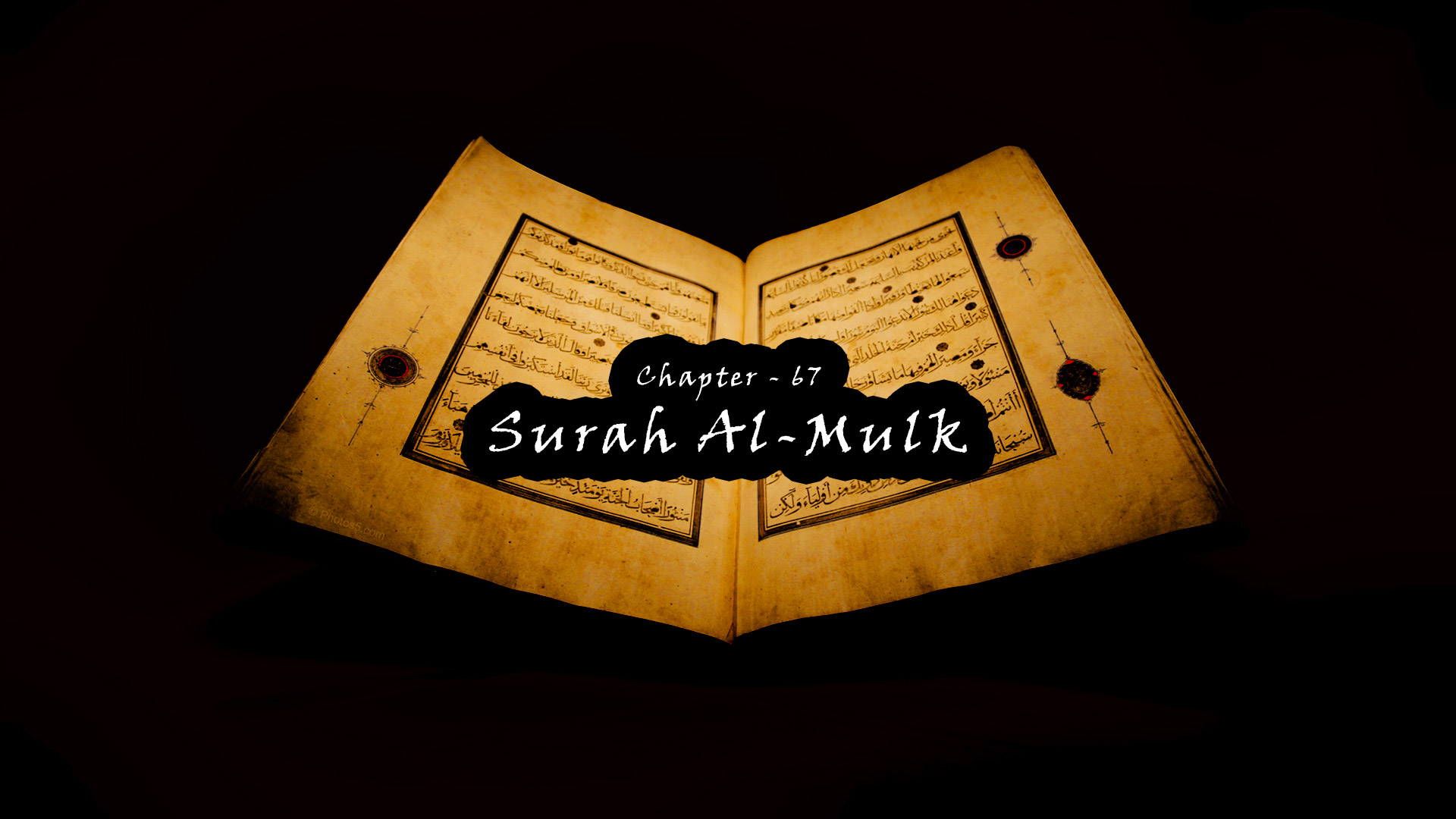 1. Blessed is He in whose hand is dominion, and He is over all things competent –

2. [He] who created death and life to test you [as to] which of you is best in deed – and He is the Exalted in Might, the Forgiving –

3. [And] who created seven heavens in layers. You do not see in the creation of the Most Merciful any inconsistency. So return [your] vision [to the sky]; do you see any breaks?

4. Then return [your] vision twice again. [Your] vision will return to you humbled while it is fatigued.

5. And We have certainly beautified the nearest heaven with lamps [i.e., stars] and have made [from] them what is thrown at the devils and have prepared for them the punishment of the Blaze.

6. And for those who disbelieved in their Lord is the punishment of Hell, and wretched is the destination.

7. When they are thrown into it, they hear from it a [dreadful] inhaling while it boils up.

8. It almost bursts with rage. Every time a company is thrown into it, its keepers ask them, “Did there not come to you a warner?”

9. They will say, “Yes, a warner had come to us, but we denied and said, ‘Allah has not sent down anything. You are not but in great error.’ ”

10. And they will say, “If only we had been listening or reasoning, we would not be among the companions of the Blaze.”

11. And they will admit their sin, so [it is] alienation for the companions of the Blaze.

12. Indeed, those who fear their Lord unseen will have forgiveness and great reward.

13. And conceal your speech or publicize it; indeed, He is Knowing of that within the breasts.

14. Does He who created not know, while He is the Subtle, the Acquainted?

15. It is He who made the earth tame for you – so walk among its slopes and eat of His provision – and to Him is the resurrection.

16. Do you feel secure that He who [holds authority] in the heaven would not cause the earth to swallow you and suddenly it would sway?

17. Or do you feel secure that He who [holds authority] in the heaven would not send against you a storm of stones? Then you would know how [severe] was My warning.

18. And already had those before them denied, and how [terrible] was My reproach.

19. Do they not see the birds above them with wings outspread and [sometimes] folded in? None holds them [aloft] except the Most Merciful. Indeed He is, of all things, Seeing.

20. Or who is it that could be an army for you to aid you other than the Most Merciful? The disbelievers are not but in delusion.

21. Or who is it that could provide for you if He withheld His provision? But they have persisted in insolence and aversion.

23. Say, “It is He who has produced you and made for you hearing and vision and hearts [i.e., intellect]; little are you grateful.”

24. Say, “It is He who has multiplied you throughout the earth, and to Him you will be gathered.”

25. And they say, “When is this promise, if you should be truthful?”

26. Say, “The knowledge is only with Allah, and I am only a clear warner.”

27. But when they see it approaching, the faces of those who disbelieve will be distressed, and it will be said, “This is that for which you used to call.”

28. Say, [O Muhammad], “Have you considered: whether Allah should cause my death and those with me or have mercy upon us, who can protect the disbelievers from a painful punishment?”

29. Say, “He is the Most Merciful; we have believed in Him, and upon Him we have relied. And you will [come to] know who it is that is in clear error.”

30. Say, “Have you considered: if your water was to become sunken [into the earth], then who could bring you flowing water?”