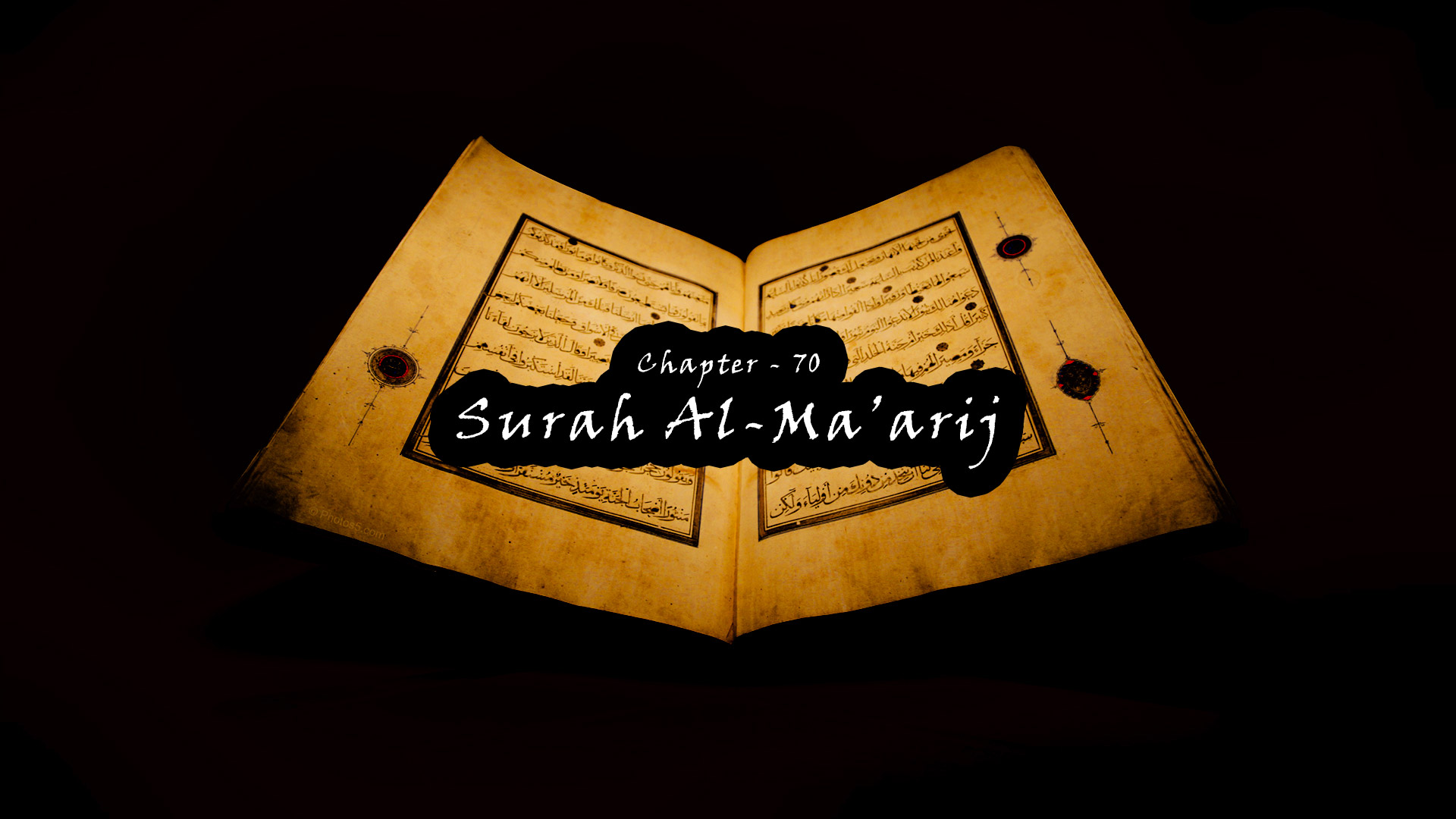 1. A supplicant asked for a punishment bound to happen

2. To the disbelievers; of it there is no preventer.

4. The angels and the Spirit [i.e., Gabriel] will ascend to Him during a Day the extent of which is fifty thousand years.

5. So be patient with gracious patience.

8. On the Day the sky will be like murky oil,

10. And no friend will ask [anything of] a friend,

11. They will be shown each other. The criminal will wish that he could be ransomed from the punishment of that Day by his children

12. And his wife and his brother

13. And his nearest kindred who shelter him

14. And whoever is on earth entirely [so] then it could save him.

16. A remover of exteriors.

17. It invites he who turned his back [on truth] and went away [from obedience]

18. And collected [wealth] and hoarded.

20. When evil touches him, impatient,

21. And when good touches him, withholding [of it],

22. Except the observers of prayer –

23. Those who are constant in their prayer

24. And those within whose wealth is a known right

25. For the petitioner and the deprived –

26. And those who believe in the Day of Recompense

27. And those who are fearful of the punishment of their Lord –

28. Indeed, the punishment of their Lord is not that from which one is safe –

29. And those who guard their private parts

30. Except from their wives or those their right hands possess, for indeed, they are not to be blamed –

31. But whoever seeks beyond that, then they are the transgressors –

32. And those who are to their trusts and promises attentive

33. And those who are in their testimonies upright

34. And those who [carefully] maintain their prayer:

35. They will be in gardens, honored.

36. So what is [the matter] with those who disbelieve, hastening [from] before you, [O Muhammad],

38. Does every person among them aspire to enter a garden of pleasure?

39. No! Indeed, We have created them from that which they know.

40. So I swear by the Lord of [all] risings and settings that indeed We are able

41. To replace them with better than them; and We are not to be outdone.

42. So leave them to converse vainly and amuse themselves until they meet their Day which they are promised –

43. The Day they will emerge from the graves rapidly as if they were, toward an erected idol, hastening.

44. Their eyes humbled, humiliation will cover them. That is the Day which they had been promised.