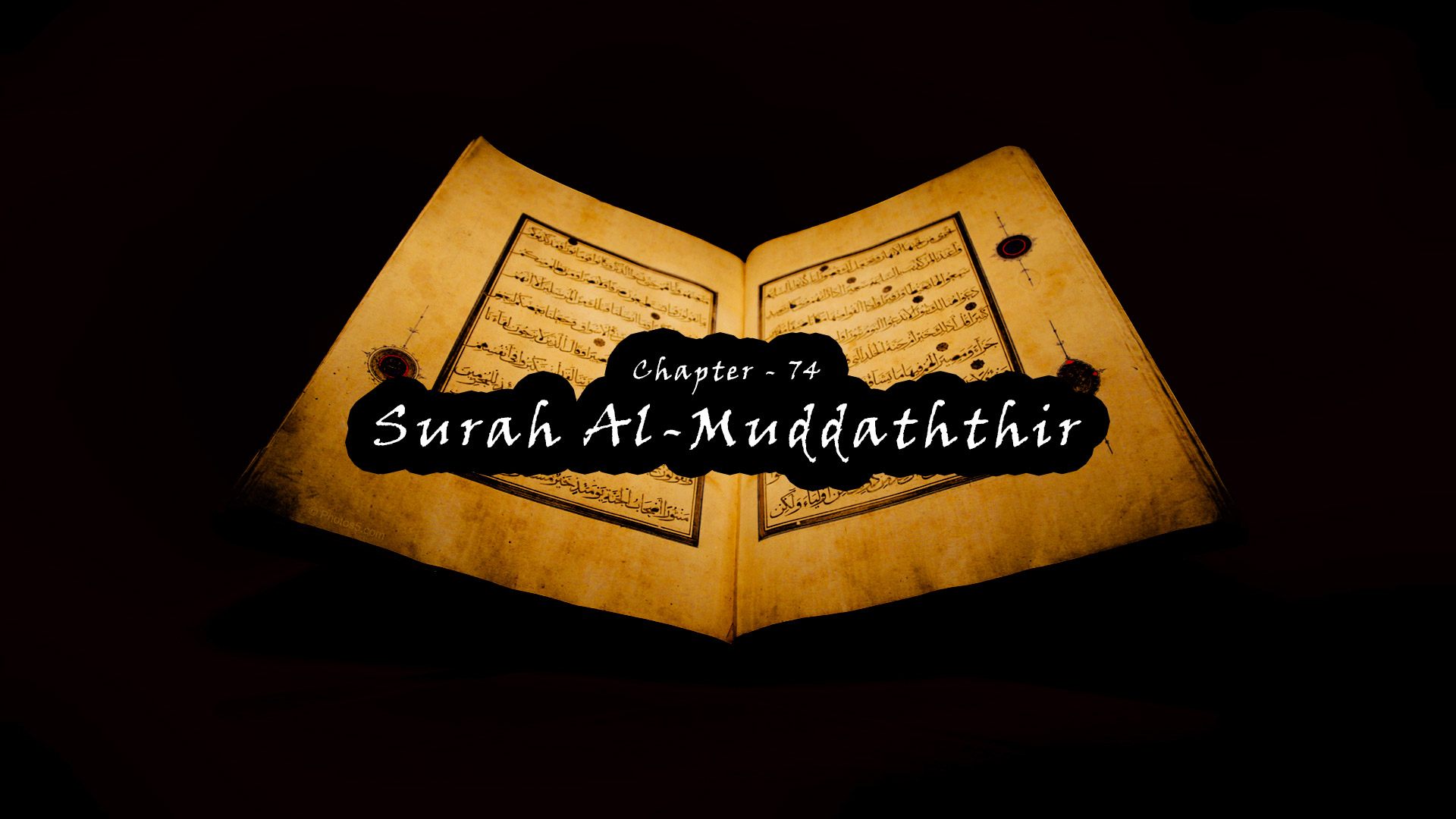 1. O you who covers himself [with a garment],

3. And your Lord glorify

4. And your clothing purify

6. And do not confer favor to acquire more

7. But for your Lord be patient.

8. And when the trumpet is blown,

9. That Day will be a difficult day

11. Leave Me with the one I created alone

12. And to whom I granted extensive wealth

13. And children present [with him]

14. And spread [everything] before him, easing [his life].

15. Then he desires that I should add more.

16. No! Indeed, he has been toward Our verses obstinate.

17. I will cover him with arduous torment.

18. Indeed, he thought and deliberated.

19. So may he be destroyed [for] how he deliberated.

20. Then may he be destroyed [for] how he deliberated.

22. Then he frowned and scowled;

23. Then he turned back and was arrogant

24. And said, “This is not but magic imitated [from others].

27. And what can make you know what is Saqar?

28. It lets nothing remain and leaves nothing [unburned],

31. And We have not made the keepers of the Fire except angels. And We have not made their number except as a trial for those who disbelieve – that those who were given the Scripture will be convinced and those who have believed will increase in faith and those who were given the Scripture and the believers will not doubt and that those in whose hearts is disease [i.e., hypocrisy] and the disbelievers will say, “What does Allah intend by this as an example?” Thus does Allah leave astray whom He wills and guides whom He wills. And none knows the soldiers of your Lord except Him. And it [i.e., mention of the Fire] is not but a reminder to humanity.

37. To whoever wills among you to proceed or stay behind.

38. Every soul, for what it has earned, will be retained

39. Except the companions of the right,

40. [Who will be] in gardens, questioning each other

45. And we used to enter into vain discourse with those who engaged [in it],

46. And we used to deny the Day of Recompense

48. So there will not benefit them the intercession of [any] intercessors.

49. Then what is [the matter] with them that they are, from the reminder, turning away

50. As if they were alarmed donkeys

52. Rather, every person among them desires that he would be given scriptures spread about.

55. Then whoever wills will remember it.

56. And they will not remember except that Allah wills. He is worthy of fear and adequate for [granting] forgiveness.